There is news from the World of Tanks Blitz universe! There will be a new American research tree! And we take a look at upcoming events and modes! Many thanks to Tony from Wargaming for providing the info!

There is news from the World of Tanks Blitz universe! There will be a new American research tree! And we take a look at upcoming events and modes! Many thanks to Tony from Wargaming for providing the info! 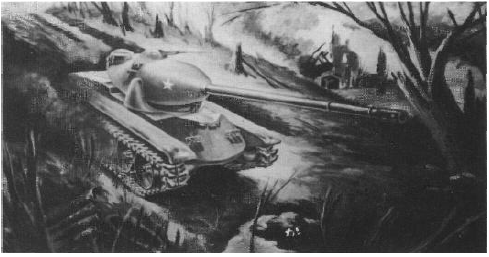 This heavy American Tier X tank with an unusual appearance is the future top of the new US research branch, which contains vehicles that have never been seen in the World of Tanks universe. The tanks in this branch are based on concepts introduced in 1953 by the H. L. Yoh Company, Inc. as part of the American R&D programme to create alternative tank designs. Many details about these developments are still secret, and H.L. Yoh changed direction completely, but some data is available to historians and researchers.

The M-VI-Y concept involved radically reducing the size of the turret in order to increase armour protection. This feature was adopted in the game. At the same time, the hull armour of the M-VI-Yoh is not outstanding – but the turret can deflect shots well thanks to its shape, but has vulnerable zones in the form of hatches. The tank enters the test with two alternative weapons – an autoloader for three and two grenades respectively. The second of these is not standard for Blitz: two shells with 450 damage, very short reload time in the barrel, DPM is higher than the more familiar gun with three shells, but slightly less penetration effect and slightly longer reload time. Also, these cannons have different negative aiming angles in the test, but in the final version they will most likely be the same.

The Yoh branch will include more (rather unusual) concepts from this company, we will talk about them later. We will also experiment with the armour parameters, guns and mechanics of these tanks during and after the test. On the test in version 7.8, the M-VI-Yoh is a premium tank – this is a temporary technical solution that allows testers to get the tank.

Is your garage also full of boosters, certificates and credit points? Then something good is waiting for you: The upcoming event “Galactic Wealth” will allow you to use these unused resources for a good cause!

Ride with activated boosters, or trade them in directly in the garage and receive Golden Globes in return!

You can then use these Golden Globes to exchange them for other things. For example, x10 (!!!!) certificates! That’s right! TEN TIMES! So it doesn’t have to be a dream any more to own a TierX tank at top speed and without any game experience! Fortunately, there are only two of these for now. Other things are camouflage, a profile background, stuff and Galactic Containers! In these containers you can find avatars, gold and FreeXp as well as certificates for the following gems: Renault UE 57, T-28, PzSfl IV, Churchill GC…

The background of the event is clear: many of you have a warehouse full of things you don’t need and the event serves as an opportunity to exchange them for more useful things! This time there’s even AFK protection! In order for you to earn in-game Golden Globes, you need to earn at least 200 experience points. Let’s hope it works…

In Gravity Mode, there is now a jump ability for light and medium tanks, as well as fighter tanks, which can be activated more often during combat. With this ability, the tank stays in the air for several seconds and thus allows extended tactical possibilities in this mode. Watch the humbug in the following video:

The Battle Pass in April has a space theme. 12 April is International Manned Spaceflight Day, an international commemorative date marking the beginning of the space age for humanity. The operation’s Cromwell collectible “Explorer” tank is space themed. According to its characteristics, the tank is similar to the explorable Cromwell, but has better accuracy and targeting, but poorer mobility.

We have reached a rhythm where operations are held regularly on a monthly basis. Some players feel that this is too often, however, we see from statistics and our surveys that the majority of players are generally happy with such a frequency of event.

Each action is an additional bonus for all players who actively play every day. They enter the game, participate in battles, complete missions and also receive bonuses for the operation. Some players think like this: There is a new operation, I have to complete missions every day. But we see it differently: I play how I want and how much I want, and I get something else through the operation. Sounds like a win-win situation 🙂

Some players will argue that they don’t want to miss the chance to win prizes and that the operation forces them to take every step. Again, it is all about personal choice. We offer a way to get extra rewards, it is available to every player. If you want to take a break and rest, that’s fine. The best experiences and the most positive emotions come from playing the game because you really want to. We don’t want to take away the opportunity to participate in operations for those who are comfortable with their frequency.

Some players equate operations with events, but according to game logic, operations are more like specials: they are regular, run at the same time and always work according to similar rules. Events are different: they are varied in terms, conditions and rules and require a variety of actions to participate. Most players have to adjust their activity level to participate. Operation is based on normal, regular game activity and requires no significant additional effort. You simply play the game as you are used to and receive rewards for doing so.

<em>Did you like this post? Then support us on Patreon, so that we are always up to date in the future!</em>